Lilian Butterwick's short stories and features regularly appear in women's and other magazines, but every so often her 'darker' side breaks through. Her first novel, 'A Silent World', written for young adults, is set on the bleak Lancashire moors in a dysfunctional near-future after the bees have gone. She is in the process of hatching plans for a second Young Adult novel, set in the Lake District in the distant and bloody past.

Annette Gordon is a Scottish-Spanish Brit, born and brought up in London. Before the age of eight she was a member of four libraries, including the mobile one, and has never stopped being grateful for access to free books. She was educated at Homerton College, Cambridge, where she read English and Education, then went on to work in television, in factual entertainment and observational documentary, and has been a TV Series Producer and Director for eighteen years. During that time she’s been writing scripts and proposals for television, but also secretly writing novels then hiding them where no one can find them, including Annette herself. She’s travelled and worked abroad extensively, clocking up a wide range of bizarre and fascinating experiences that include sailing the Atlantic at seventeen, to directing the Mexican army and several World Cup footballers she didn’t recognise, at high altitude, whilst stricken with Montezuma’s revenge. She enjoys light and shade in her writing and reading, and believes the future resides in a story. Currently, she’s mentored by the novelist Jill Dawson, via her company Gold Dust, and is in the middle of re-writing another novel. I AM YOU is set in the 1980’s and the present day, and is about David Sherringham, an astro-physicist and TV presenter, who when his career is threatened by historic accusations of statutory rape, remembers his first love Nina, the long-denied secrets and failures of the past, and his rivalry with older brother Adrian. Annette lives in London and France. 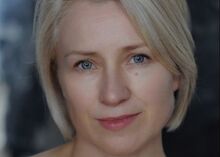 After a career as an actress, and then a full-time mother, the last few years have been focused on writing poetry, screenplays and, primarily, fiction for Joanna Merifield. Joanna has just graduated from Brunel University with a Masters Degree in The Novel, and prior to that she completed the Diploma in Creative Writing at Oxford University. The Lucy Cavendish Fiction prize is the first novel writing competition she has submitted to, and Joanna is delighted to be shortlisted with ‘The Second Garden’. A miniature portrait of a family in extreme pain seen through the eyes of the teenage daughter, Stella, who has become an emotional lightening rod for her parents’ loss of another child.

Anni Domingo is an actress, singer, dancer who has worked extensively in the UK and abroad in Theatre, Radio, TV and films. She teaches English, Drama and Creative Writing and works regularly as a Director in the UK as well as in the USA. Anni runs her own company, ‘Shakespeare Link,’ taking Shakespeare workshops to schools and colleges. She has written several workbooks on Shakespeare’s plays, now used in many schools. Her poem ‘Empty Cradle’ is published in the anthology Secret and Silent Tears. Her short story ‘Empire Girl’ shortlisted in Words and Women Fiction competition has just been published in Words and Women Anthology One.  Anni is thrilled that her novel, ‘Breaking the Maafa Chain’ has been shortlisted for the Lucy Cavendish College Fiction Prize 2014. Anni lives in the Fens of Cambridgeshire with her three children. Outside of work she sits as a Magistrate in Cambridgeshire.

Gail Honeyman’s success came with Eleanor Oliphant is Completely Fine, after first appearing on the Fiction Prize shortlist in 2014, it was published by HarperCollinsin 2017, and has since seen critical acclaim. Eleanor Oliphant won the 2017 Costa Book Awards ‘First Novel’ Award, and was a 2017 Goodreads Choice Awards Best Fiction Nominee. In 2018, Gail won the Audie Award for Fiction, the British Book Awards’ Book of the Year 2018, and was Waterstones Fiction’s Book of the Month in February.
Powered by